Leading intralogistics automation provider, KNAPP AG, has announced its results for the business year 2018-2019, which show another period of solid growth. Order volume exceeded the one billion euros mark for the first time in the company’s history, while net turnover rose by 34.5% to 954 million euros. Profits were also up by an impressive 44.2%, with an EBIT of 65.2 million euros.

The Managing Board – Gerald Hofer (CEO), Franz Mathi (COO) and Christian Grabner (CFO) – expressed delight at a recent press conference held at the group’s headquarters in Hart, close to Austria’s second-largest city, Graz. The board ascribed KNAPP’s ongoing success to continuous investment. In the last year alone, the company invested over 43 million euros in buildings and infrastructure, and a further 48 million in research and development – an increase of 25%. “Innovation and development remain two of KNAPP AG’s main focuses,” confirmed Franz Mathi, COO. “Over the past year we have extended our sites in Leoben and Dobl, and have expanded our capacities in Poland, Slovenia and Croatia, to name but a few. In the future we will invest in expanding our subsidiaries in Austria and around the world – including a new headquarters building in the USA.” 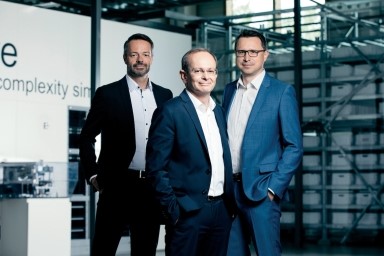 KNAPP now has more than 4,500 employees around the world, over 700 more than in the previous year. “As a company, we’re used to constantly evolving and to re-inventing ourselves in certain areas. One major challenge we face is finding the right employees and integrating them in the company,” explained Christian Grabner, CFO. “To help us do so, we have invested in employer branding activities in recent years.” KNAPP offers excellent career prospects in an exciting technical and international environment, with a positive and creative corporate culture and a focus on personal development.

In addition to investing in the development of sustainable intralogistics solutions for clients, KNAPP is committed to sustainable operation at its headquarters and its locations around the globe. One example in the past business year is the ‘KNAPP goes green’ campaign to promote the use of electric vehicles and public transport, which received 1.4 million euros of funding from the company. Over 370 employees are now taking part, with further initiatives in the pipeline. Sustainability has also been demonstrated by the recent installation of a photovoltaic system on the roof of the company headquarters in Hart bei Graz, which has a peak performance of almost 200 kWh. This solar energy not only powers the office buildings, but also 28 charging stations for electric cars.

With exceptional growth over the last two years, the outlook for KNAPP could not be brighter – although the company recognizes the need for continued investment in innovation. “In the future we will need to work with highly integrated networks that extend from production all the way to the end customer,” explained Franz Mathi, COO. “There are new technological approaches to this trend that we are using as the basis for our solutions.” Gerald Hofer, CEO, added: “The value creation chains for products and services are constantly changing. It’s vital that we change with them and recognize new trends.”