By Matt Jones2nd October 2019 No Comments 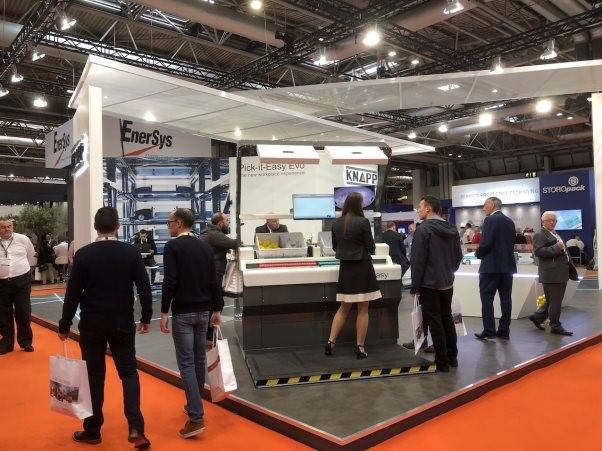 Productive Days at the NEC for the KNAPP team

“The four days at the NEC were productive for the KNAPP team,” commented Craig Rollason, Managing Director for KNAPP UK. “As well as welcoming a number of prospective clients on our stand, we had very positive meetings with existing customers, suppliers and associates.” Promoting its technologies for automated handling, storage and order fulfilment, the KNAPP team was joined on the stand by colleagues from sister company, Dürkopp Fördertechnik, which has expertise in garment logistics.

Developed with experience from over 1000 workstations from its Pick-it-Easy series delivered around the world to date, KNAPP’s Pick-it-Easy Evo combines ergonomic design with intuitive operation to enable warehouse staff to work smart, not hard. 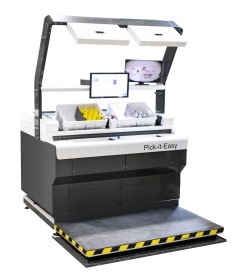 A multitude of functions can be performed with Pick-it-Easy Evo – from standard processes such as picking, decanting, consolidation and returns handling, to customer-specific operations. The new workstation is designed to handle a broad range of goods – containers, trays and cartons in various dimensions, with loads of up to 50 kg – while minimizing strain on workers by reducing stretching, stooping and lifting.

Developed to work in synergy with KNAPP’s OSR Shuttle™ Evo automated storage system, the Pick-it-Easy Evo can either have a traditional connection to the store through a pre-zone or it can be connected directly to the OSR Shuttle™ in order to save space.

Developed by redPILOT GmbH – a start-up company within the KNAPP group – redPILOT software is designed to optimize warehouse logistics, with all experience gained being used for machine learning. The solution helps warehouse operators to use all available resources – such as systems, personnel, energy, space and materials – dynamically and intelligently in order to optimize performance in a context of constantly changing factors such as order structure, delivery dates and store optimizations. The machine learning enables bottlenecks to be eliminated and operations to be fully optimized over time.

The redPILOT solution can be seamlessly integrated into a client’s application regardless of which WMS, WCS or WES is in place, either being hosted as a cloud service or provided into the client’s existing hardware infrastructure. KNAPP’s KiSoft logistics software platform manages all processes – from goods-in to goods-out – and flexibly integrates various technologies.

KNAPP’s redPILOT software won the award for Best IT Innovation at the 2019 Material Handling Industry (MHI) Innovation Awards at ProMat in Chicago earlier this year. The solution has been commissioned at 47 logistics sites worldwide for customers in diverse industry sectors – including seven sites of the German supermarket chain, EDEKA.

KNAPP AG’s order volume topped one billion euros for the first time in the company’s history in the business year 2018-2019. Net turnover rose by 34.5% to 954 million euros and profits were also up by an impressive 44.2%, with an EBIT of 65.2 million euros.

Headquartered in Graz, Austria, the KNAPP group now employs more than 4,500 staff worldwide, an increase of 50% since 2016. The group’s British subsidiary, KNAPP UK, has also grown considerably in the last three years. “Our headcount now stands at 230,” said Craig Rollason, Managing Director of KNAPP UK, “compared to 185 in 2016, and this total is projected to rise to over 290 next year.” 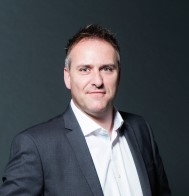 In the last financial year KNAPP, which has 41 locations around the world, invested over 43 million euros in buildings and facilities, and a further 48 million in R&D – an increase of 25%. The company’s sites in Leoben and Dobl (Austria) were both extended and its capacity in Poland, Slovenia and Croatia – among other locations – was expanded. In addition, a new headquarters building is planned for the US, one of KNAPP’s fastest-growing markets. The company’s US subsidiary is currently installing one of the largest systems ever delivered by KNAPP – for Digi-Key Electronics at Thief River Falls, Minnesota. The new facility has been designed with capacity to store 1.66 million SKUs using KNAPP’s OSR Shuttle™ Evo technology, with over 1000 shuttles being deployed to support goods-to-person order fulfilment.

KNAPP UK is currently installing intralogistics systems for Shop Direct in the retailer’s new, automated distribution centre at East Midlands Gateway. “This is one of the largest orders ever for KNAPP UK and delivery is progressing well,” commented Craig Rollason, “with go-live planned for early in 2020.” Other recent projects for KNAPP UK have included extensions or upgrades for John Lewis, M&S (Bradford), Alliance Healthcare, Well, Clarks and Phoenix Healthcare, as well as new projects for IKEA, M&S (Welham Green) and Debenhams.